The cacophony erupted earlier than usual this morning. The cat was the first thing to greet me as I swung my legs over the edge of the bed. By “greet me,” I mean he immediately twined around my legs, almost caused me to fall flat on my face and then looked as me as if I needed to be more careful. 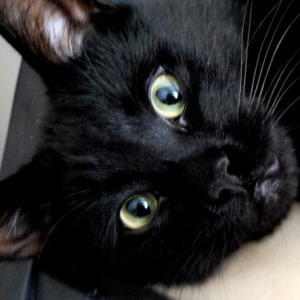 My son – actually, I’m not quite too sure what he had going on, only that it was noisy and that he trailed after me while growing progressively louder. I finally turned, gave him a bleary eyed stare and asked, “Has Mommy had her coffee yet?”

“Do you think it’s a good idea to start all of this before I’ve had my coffee?”

Understanding flashed in his eyes. “No!”

“Such a good child. I’ll see you in a few minutes, after I’ve become human again.”

I’m still working on that. While last night was a great one as far as productivity (I’m more than halfway done in NaNoWriMo! 18,000 words to go! Yay!), it also meant that I was up later than usual. By the time I was ready for bed, I heard a little squeak followed by, “Mommy? I think I’m going to be sick.” Things were dodgy for a bit and at the end of it all, he asked if I would sit on his bad and talk. These little requests often make me think of my dad and his stories about growing up without a mother (my paternal grandmother died when Dad was two years old). I sat down and listened to him babble for awhile before eventually falling asleep.

He was bouncing at my bedside two hours later, ready to start the day.